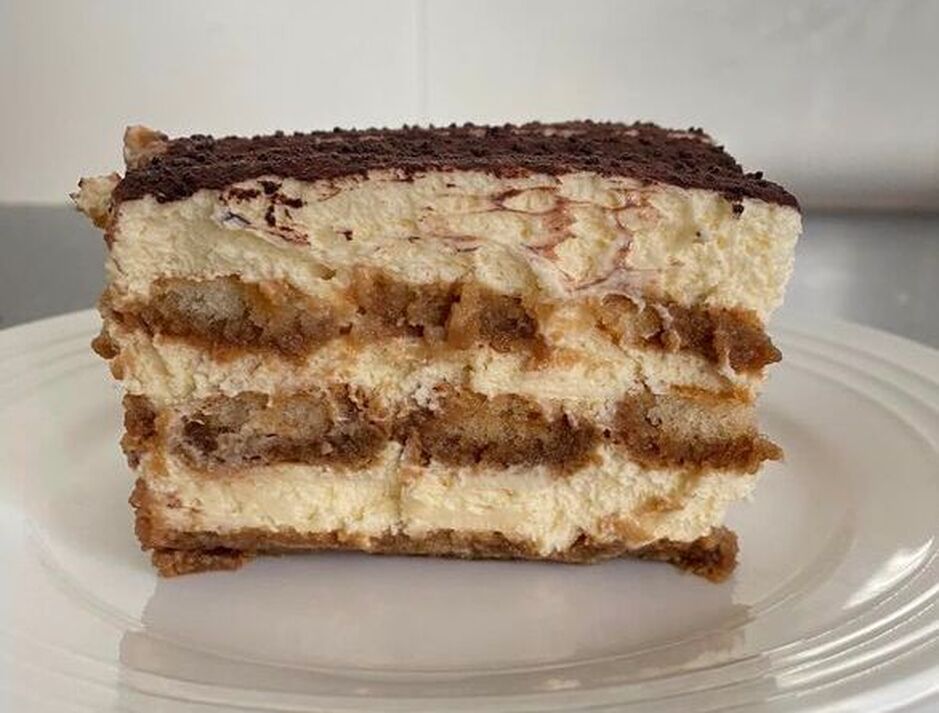 We all know by now that Tiramisu translates as 'pick me up'. It's a classic dessert, it's simple to make, it looks amazing, and it's delicious.

I recently tried this version of the tiramisu at my Goddaughters house, she made it and we all loved the flavour. Now Gino uses Amaretto (I don't like amaretto, at all), so when my goddaughter used frangelico instead (which I love), I thought this would be great. Well one bite in and I loved it.

So for New Years Day this year, I thought I'd give it a go myself. Now I will say, the flavour was delicious, but it was not perfect, it was a little wet, a little soggy, a bit too creamy. What went wrong, reason number one, I didn't really follow the recipe properly, I didn't beat the double cream. I thought it was thick enough, but it wasn't, so the mascarpone mixture didn't set properly. Second reason, which I have found out recently, mascarpone brands matter. Normally I have never bought the Woolworths (or Coles) or any other generic brand of mascarpone, but have you ever tried to find mascarpone cheese around Christmas time, it is impossible to find, it's always sold out. So when I finally found the Woolworths brand I grabbed it. Well I have since found out these generic brands of mascarpone are too thin and won't set, and that's why my cream layer was too thin and didn't set. So as I loved the flavour, I needed to make it again. 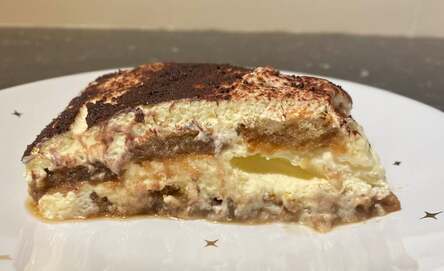 My first attempt, you can see the liquid in the base, the flavour was great, but it just wasn't perfect.
Now one more thing I found with my first attempt is there is a lot of cream here to biscuit ratio. So I either needed to make it in a bigger dish, or I needed to go up a layer. I chose to go up an extra layer of biscuits. So if you like, you can make two layers of the tiramisu, I would just choose a larger dish, or you need a deep dish that will allow for three layers.

Now my second attempt was perfect, the cream mixture set, I had a better cream to biscuit ratio and the flavour was amazing. I could actually get a nice slice out of the tiramisu, not that it matters, as I usually serve it like a trifle where you just dollop it on your plate with a spoon, but if you wanted to slice it, you could. But, although the tiramisu was perfect, the two photos I took of the tiramisu, were blurry. 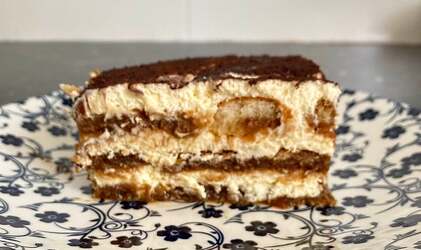 So today I am making my third attempt at this tiramisu, fingers crossed, all goes well with it.

Now lets talk liqueurs, I love Frangelico, it’s a hazelnut flavoured liquor. I also love Kahlua or Baileys, which are coffee flavoured. Other options: which I haven't tried but could work is Croatian Rum (it's fabulous in desserts, brandy or Marsala. Use what you love. You could even make it alcohol free and use hot chocolate, or vanilla extract to flavour the coffee.

Tip: The tiramisu needs to be covered and refrigerated for a few hours. In my baking dish this tiramisu goes all the way to the top, if I covered it directly, when I took off the cling film, it would take off some of my cream. So what I do is, I break two chops sticks in half (I always save the chop sticks I get with sushi, as I use my hands normally at home or we use our own 'fancy' chopsticks I bought) and poke them in near the corners of the tiramisu. Then I cover the tiramisu over those sticks and my cream is untouched. I'd rather have four small holes, than my whole cream ruined. You can see the holes in one of the photos below.

This is a great dessert to serve at parties, because you can make it in advance, it's quick to make, it feeds many and it's delicious. It's time you give this a try.

Put the coffee in a medium bowl and stir in 4 tablespoons of the frangelico. Set aside.

Pour the cream into a medium bowl and whip until thick enough to just hold its shape and form soft peaks. Set aside.

Place the egg yolks and sugar in a large bowl and whisk using a balloon whisk (or electric hand held mixer) for about 5 minutes until thick and pale. Add the mascarpone and beat thoroughly. Gently fold in the whipped cream and remaining frangelico.

Put the egg whites in a separate bowl and with clean beaters, whisk with an electric hand whisk on full speed until they form stiff peaks. Using a metal spoon, gently fold one third of the egg whites into the mascarpone mixture until well blended. Fold in the remaining egg whites in 2 stages. Set aside.

Dip one of the biscuits in the coffee for 2 seconds (no longer) and place it in the bottom of a 20 x 30 x 7cm ceramic dish, with the sugar-side facing upwards. Repeat until the bottom of the dish is covered with half the biscuits.

Cover with cling film and refrigerate for 3 hours.

Just before serving, remove the cling film and dust with cocoa powder. 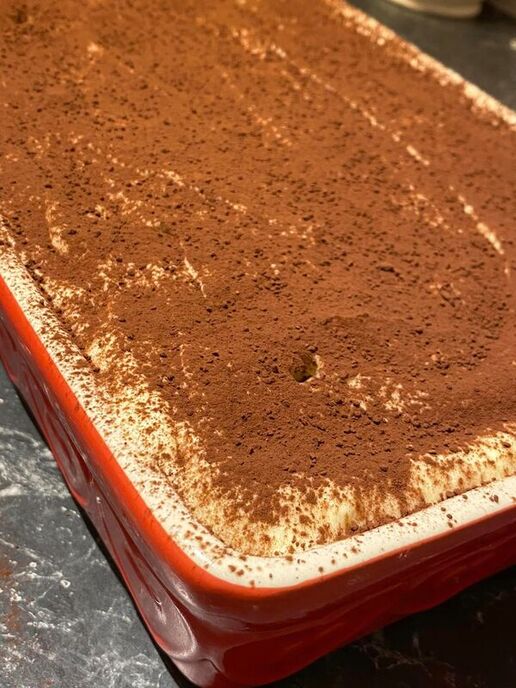 Now either slice and serve the tiramisu or you can get a spoon and dollop out your serves, like you would with a trifle. 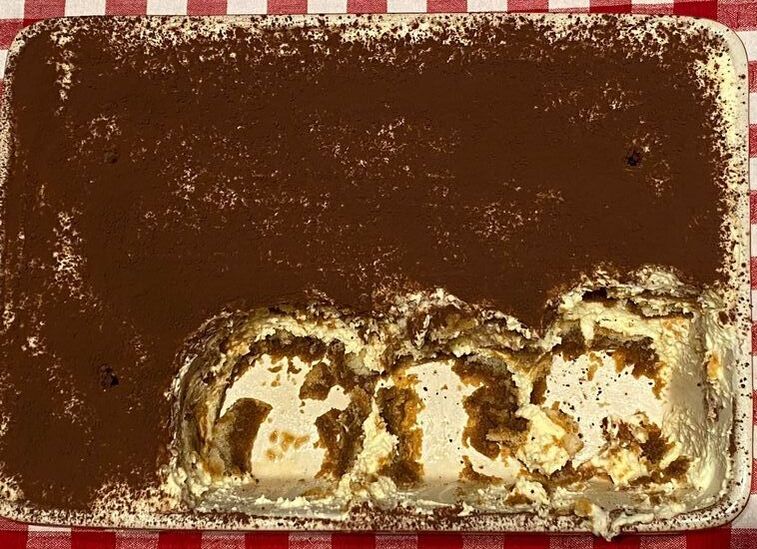