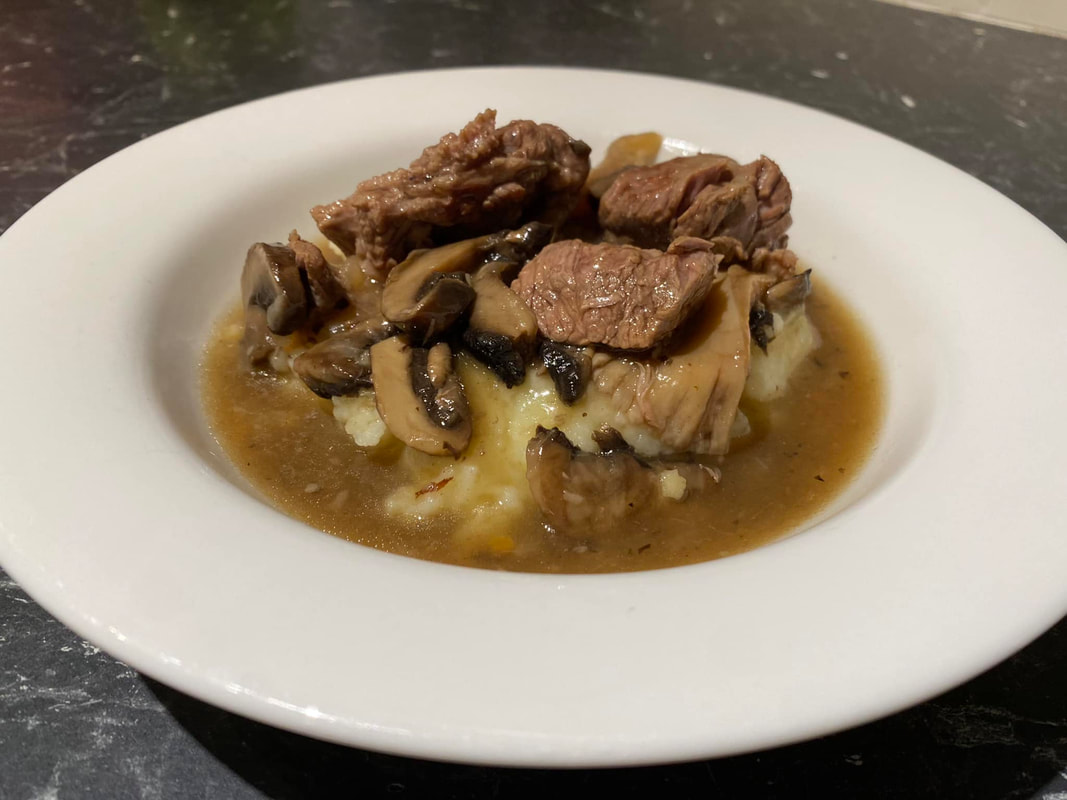 Our Eating Around the World Adventure has taken us to Switzerland. It's not easy finding Swiss cookbooks, but I found two, both without pictures, so I had to read the cookbook to figure out which recipes I wanted to try rather than rely on photographs.

I came across a recipe for Pot Roast with Mushrooms (Gedampfter Rindsbraten mit Pilzen). After reading the recipe, I liked the idea, but I wanted to change it a bit. I wasn't completely sold on doing a roast, I felt like a stew.

So I cut up the meat into chunks rather than leave it whole. I didn't want to add cloves, as I wasn't sure I would like it, I added an extra onion, as I felt it needed it. So I proceeded with the recipe, after I added all the ingredients, I felt there wasn't enough liquid to cook the meat properly. The recipe mentioned you could add wine, so I added as much as I thought it needed. I also decided to add some vegetable stock to. So I let it cook, until the meat was soft. Then as I added extra liquid, I decided to thicken the stew with some cornflour, to give it a thick luscious sauce. Well, it was delicious. The meat was soft, the sauce was packed full of mushroom flavour.

The amount of mushrooms may seem excessive, bit it isn't, it's necessary to saturate the meat with the mushroom flavour. Now I like to use a variety of mushrooms, so I went with portobello, king edward, swiss brown and oyster mushroom. You could use fresh porcini, or any mushroom you love. I prefer swiss brown to button mushroom as they have more flavour.

Here is a recipe where you make something special from a few simple ingredients.

Recipe adapted from The Swiss Cookbook by Nika Standen Hazelton

Trim the meat of all fat. Heat the butter and oil in a large cast iron casserole dish over high heat. Brown the meat in batches until it is browned on all sides, place in a bowl, until needed.

Lower the heat to medium, add the onion, saute for 2-3 minutes. Add the mushrooms, cook stirring, for about 2 minutes. Return the meat to the pan, season with salt and pepper. Add the vegeta, wine and enough water to just cover the meat, I used 500ml. Bring to the boil, lower to heat as much as possible, cook covered, for 2 1/2 hours or until the meat is tender.

Now the sauce will most likely be thin, you can just increase the heat and cook uncovered to let the excessive moisture evaporate to the desired consistency, it will take about 30 minutes. But I prefer to dissolve the cornflour in a tablespoon of water and make a wet paste, pour it into the stew and cook gently for a further 30 minutes. You will need to stir it every few minutes as adding the flour means it can catch on the bottom of the dish.

Once thickened to how you like it. Serve hot with mashed potato or buttered noodles and I like it with a green salad on the side. 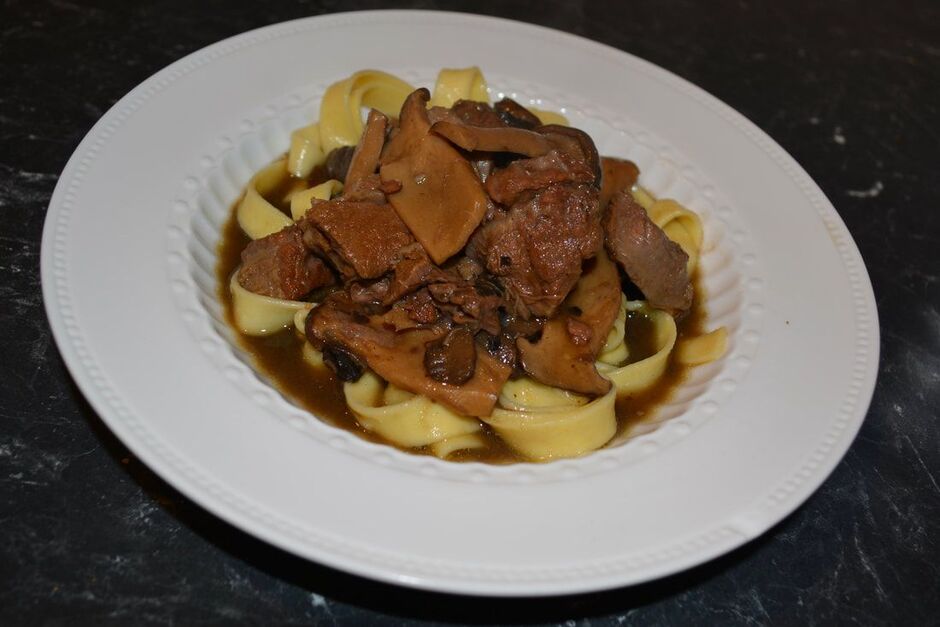