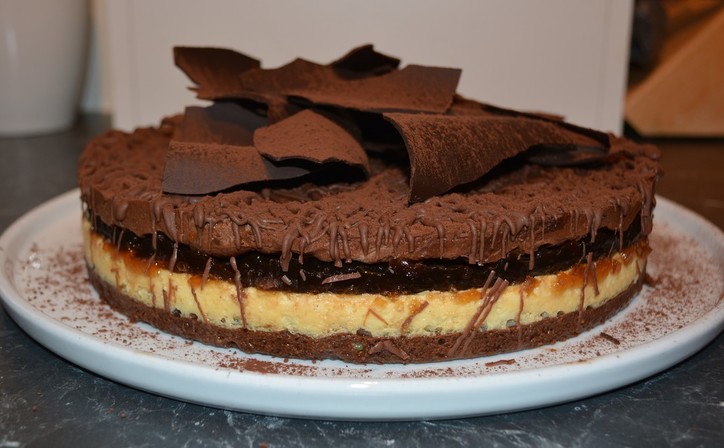 Indulgent, that is how to describe this cake, one word, indulgent.

This is one of those cakes you don't make every day, it is not something you even want to eat every day, but when you do make it, you will savour every mouthful.

It is rich, but not sweet.

It is a chocolate and coffee combination that is seductive in a dessert kind of way.

Five layers that gel together and create a delicious flavour sensation. The base is a Dark Chocolate Fudge Cake. The next level is a White Chocolate Cheesecake. The following is an Espresso Jelly. Top that with Milk Chocolate Mousse and finish off with a Dark Chocolate Glaze. And just because there is not enough chocolate already, decorate with Chocolate Waves and a dusting of Cocoa.

I have changed the original recipe, so if you have the cookbook this is what I did. After making it the first time, the recipe said to cover the cake completely with the chocolate glaze. I did that, and it looked great, until the sides started coming off, so I removed them, no big deal still looked great. 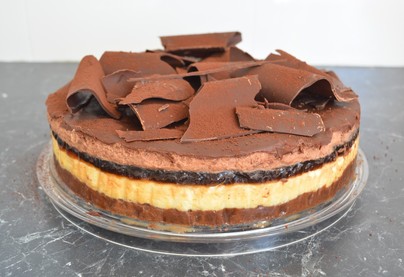 The real problem though with the glaze was that it sets hard, which made slicing the cake very difficult. Even after heating a knife it was near impossible to slice the cake without squashing the layers below. So what I decided to do next is to place the glaze in a piping bag, make a small hole and weave the glaze over the cake in thin string like style, in a criss cross fashion, so even though it will set hard, there will be gaps and the chocolate is thin, so it will slice easier. I still had to heat up a knife, but the knife went through without squashing the bottom levels.

When you bake the fudge layer and the cheesecake layer. You want to bake it until it is just set and still has a slight wobble. This is important or you will be left with a hard base and cheesecake. I bake it for 25 minutes even though the recipe stated 30 minutes. But in all honesty you do need to start checking it at 20 minutes as every oven is different.

The jelly level is the most delicate level. It is why you need to slice gently. You really do need to set the jelly to custard consistency before placing it on the cake, or it will run over the sides. And if by chance you set it too much, don't panic, use a fork, break up the jelly thoroughly and spread over the cake, then if there is still lumps, break it up more and spread over the cake. The mousse layer will cover up any major flaws in the jelly.

Please use 70% cocoa, dark chocolate where specified, this will ensure you have a rich, but not sweet cake.

So here is a cake that has a few steps, but each step is quite easy. I have tried to explain how to eliminate any problems I came across, so that you can have the success with the cake that I have had. You can make this cake up to 3 days in advance. It is actually great to make it over a 2 day period. I tend to do the first three layers on day 1 and finish it on day 2.

Quick tip also, I use 60g eggs. 1 cup measure = 250ml, 1 tablespoon = 20ml and 1 tesapoon = 5ml. For the most part I like to weigh things rather than use cups, as different countries use different cup sizes and weight is the same everywhere.

Give this a try next time you are having people over. Serving up this indulgent five layer cake will impress your friends and family.

Chocolate Waves
100g dark chocolate (70% cocoa), chopped finely
1 teaspoon Dutch processed cocoa
​
Preheat oven to 160C/140C fan forced. Unlock the base from a deep 22cm springform pan; invert base, then cover with a piece of baking paper. Lock the ring around the base, over the paper (the paper will extend outside the pan making it easier to remove the cake later). Grease pan; line sides with baking paper, extending the paper 5cm above the side.
​
Dark Chocolate Fudge Cake: Stir butter and chocolate in a small saucepan over low heat until smooth. Remove from heat; stir in sugar, then egg, flour and sour cream. Spread mixture into prepared pan; stand until required.
​
White Chocolate Cheesecake: Stir cream and chocolate in a small saucepan over low heat until smooth; cool. Beat cream cheese and sugar in a medium sized bowl with an electric mixer until smooth. Beat in cooled chocolate mixture, then egg (do not overbeat). Pour cheesecake mixture over fudge cake in pan.

Bake for 25-30 minutes or until the centre of the cheesecake is set , but still has a slight wobble. Cool in the oven with the door ajar. Refrigerate.
​
Espresso Jelly: Sprinkle gelatine over 1/4 cup (60ml) of the water in a small heatproof jug. Stand jug in a small saucepan of simmering water, stir until gelatine dissolves; cool. Place the remaining water in a small saucepan with sugar and coffee granules; stir over low heat until sugar and coffee dissolve. Stir in gelatine mixture.

Transfer mixture to a medium jug. Refrigerate 30 minutes or until mixture thickens slightly to the consistency of custard.

Pour jelly mixture over cheesecake in pan; carefully smooth the surface. Refrigerate 30 minutes or until set.
​
Milk Chocolate Mousse: Stir chocolate in a small heatproof bowl over a small saucepan of simmering water (don't let the water touch the base of the bowl) until smooth; cool. Beat cream in a medium sized bowl with an electric mixer until soft peaks form. Add a tablespoon or two of the cream to the chocolate mixture in the warm chocolate bowl. Now fold the chocolate into the remaining cream. Spread the mousse mixture carefully over the jelly in pan; smooth surface. Refrigerate 3 hours or overnight until set. 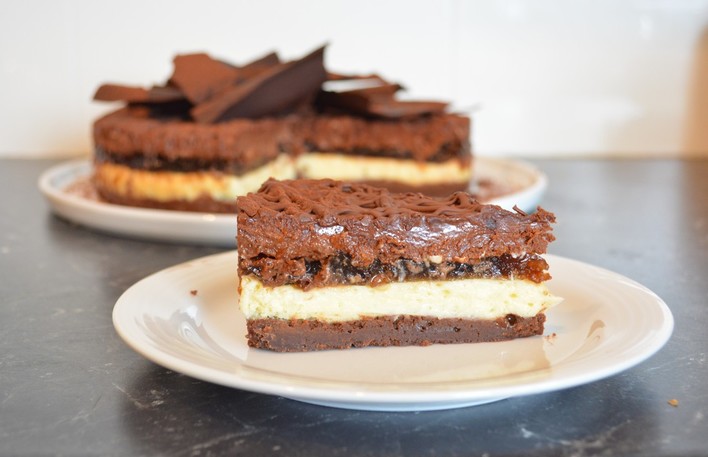