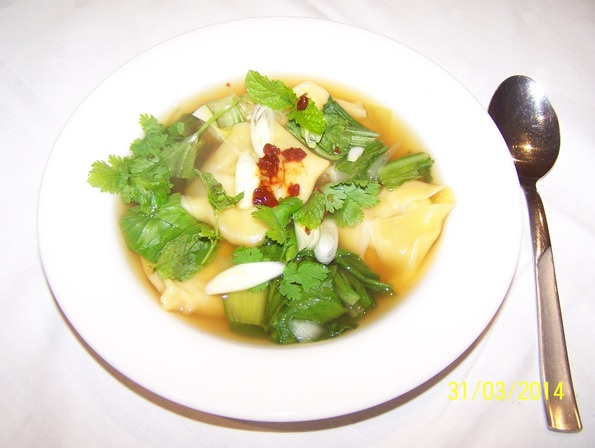 I love trying new things, I love experimenting in the kitchen. Some recipes I love immediately, some I have to tweak a little. This is one I tweaked.

The first time I made this soup, I loved the wontons, they were very flavoursome, but I thought the soup lacked flavour. So then I tried another recipe, but I used the same wonton filling, why change something I thought was great. This time I was happy with the soup as well.

Wrapping the wontons was easy enough, with this being my first attempt at it, I didn't find it difficult at all (once I figured out how I liked them). If you have any leftover filling, just freeze it for another time, or with wet hands form mini meatballs, and add it to the soup when adding the wontons, they don't fall apart.

As for the Sambal Oelek, this was my first taste of it, so I will mention, if this is your first try, add a small amount, it is really spicy, but do add it, it really adds to the overall flavour of the soup.

I also like to break the wontons in my bowl when eating them, as they are large, but more importantly the filling adds even more flavour to the soup when it is broken in the soup.

This is a lovely light soup, very fragrant, it was a hit with my family.

Now lightly moisten with water the two corners of the folded edge. Bring the two corners of the folded edge together and press to seal. You now have a tortellini shape. (You can simply fold in a rectangle shape, as seen below also, but it doesn't look very nice). Place on a baking tray lined with baking paper. Repeat with remaining wrappers and mince mixture. Refrigerate until needed. 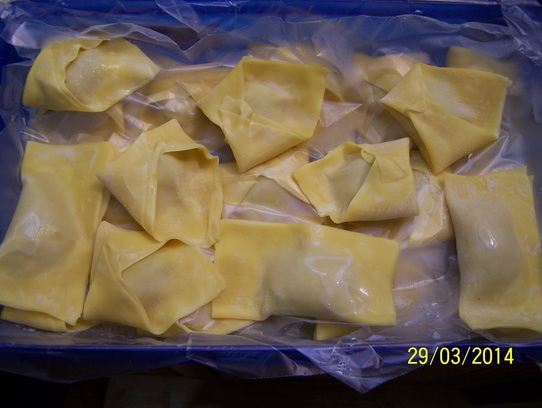 Add carrots, bok choy stems and wontons to the stock, simmer, uncovered for 5 minutes. Add the bok choy leaves, mushrooms and cabbage. Cook for 2 minutes or until leaves have wilted and cabbage is tender.
Ladle into bowls. Sprinkle over spring onion, coriander and mint. Serve with sambal oelek.