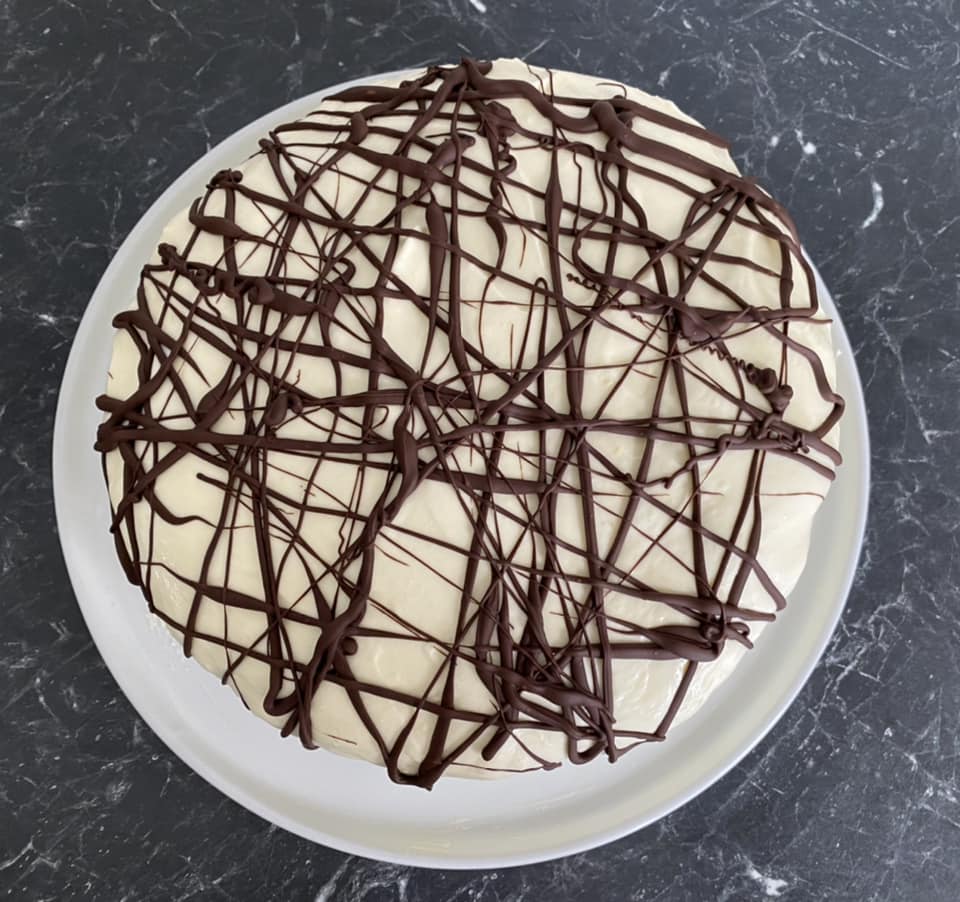 I love a good Cannoli, they are amazing, so when I came across a recipe for a cannoli cake, I had to try it.

What a great cake. It is made from two sponges, soaked in an orange syrup, sandwiched together with a ricotta 'cannoli' filling. Then it is all covered in a vanilla cream icing.

Do not forget to add the choc chips into the cake, they are needed for the chocolate hit. The orange liqueur is optional, but I love it, so I add it. If you don't want to use it, just add more orange juice.

I recently changed the sponge part of this recipe, as this is a better sponge, than the one I had on here previously.

I have made this as a birthday cake for a friend of mine, and I have made it to take to a barbecue recently. So far it has been a hit with everyone that has tried it. This cake is more an adults cake than a kids cake. But my daughter who is eleven loves it.

The cake can be made the day before.

You may not need all of the icing. I like to ice the cake, leaving some icing aside, then set it in the refrigerator for an hour, then touch up the icing, if needed with leftover icing.

I love it, it is light, it is fresh. Give it a go, you won't be disappointed.

Cake can be made a day before and kept in the refrigerator.

Put plain flour, bicarbonate of soda and cream of tartar in a 1 cup (250ml) measuring cup. Fill the remainder of the cup with cornflour.

Beat eggs and sugar on high speed for 7 minutes. Add the vanilla and beat for 30 seconds to combine.

While the eggs are beating, sift flour mixture three times onto greaseproof paper.

Turn the mixture to lowest speed and gently add the flour mixture and beat for 1 minute until smooth. Divide mixture between your two prepared cake tins.

Place in the oven on centre shelf for approximately 20 minutes or until the sponge springs back when touched or sponge is coming away from the side of the tin.

Take sponges out of the oven. Place baking paper on wire racks to cover. Turn sponges out from tins onto the wire racks. Allow sponges to cool completely. 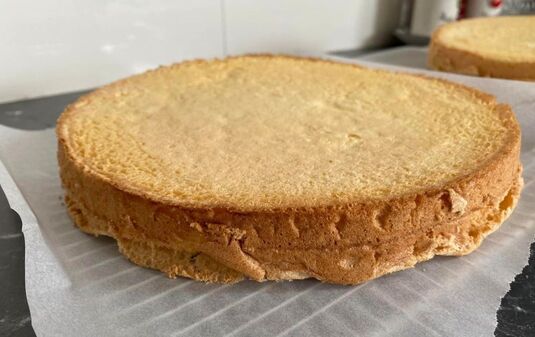 ​From the oranges you need to grate 2 teaspoons of zest. Once you have zested the oranges, juice the oranges, you will need 5 tablespoons juice (if you are not using the liqueur increase the juice to 8 tablespoons). Stir liqueur (if using) into the orange juice, stir, set aside.

In a large bowl of an electric mixer, add the cream cheese, beat for a minute. Add the ricotta and beat another minute. Now add the icing sugar and grated zest and beat until smooth. Stir in 45g of the chocolate chips.

Brush both the tops of the cakes with the orange juice mixture. 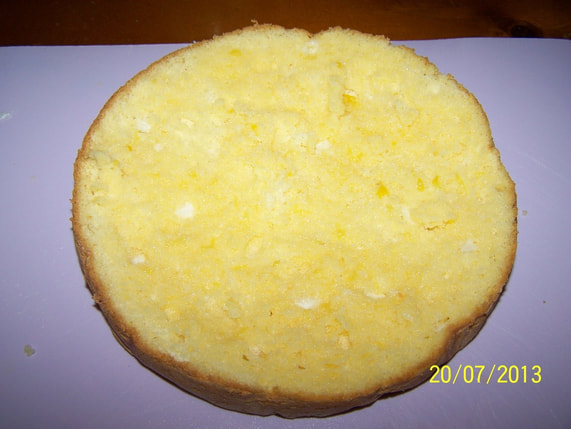 ​Place one sponge, orange soaked side up, onto your serving plate. Place the ricotta mixture into the centre of you cake, spread out to the edges, but make it dome shaped, so you have more icing in the middle, and less towards the edges. 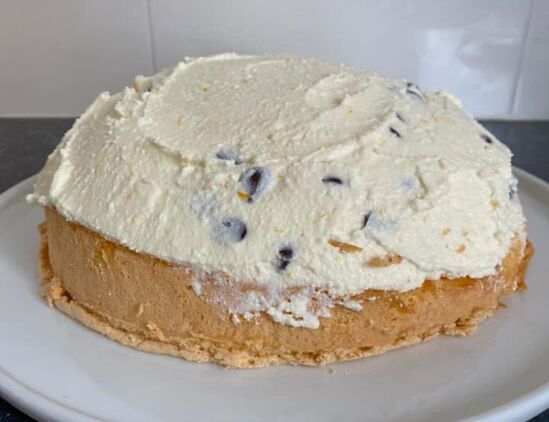 ​​Now you need to place the remaining sponge on, orange soaked side down. If it doesn't want to mould over your dome shape without cracking, you may need to make slit from the centre of the cake to one edge to allow the cake to fit the dome shape.
​
Vanilla Cream Icing: In a small bowl, using electric beaters, whip the cream until stiff peaks form.

In a medium bowl of an electric mixer, beat together the butter, milk, icing sugar and vanilla until smooth. If needed add more milk to the icing to get it to a spreadable consistency. Fold the whipped cream into the icing mixture. Spread over the top and sides of the cake. Refrigerate while you melt the chocolate for the top. ​ 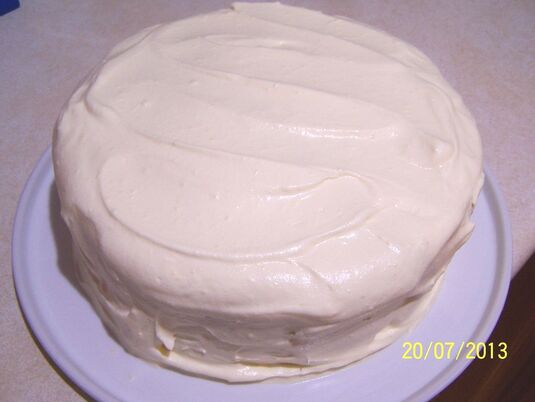 Find the centre of your cake, now starting from the centre, make concentric circles, moving out to the edge of the cake. (Below is my first ever attempt at doing this, so it shows it is not that hard).

Now before the chocolate sets, get a cocktail skewer and draw spokes around the cake about 4cm apart. Start from the centre of the cake and drag the skewer to the edge. The next spoke should start from the edge and drag it to the centre. Keep alternating directions of your spokes i.e. edge to centre, centre to edge.

​You can also just go crazy like the top photo and just drizzle chocolate all over the cake.

Refrigerate the cake for a minimum of 4 hours. 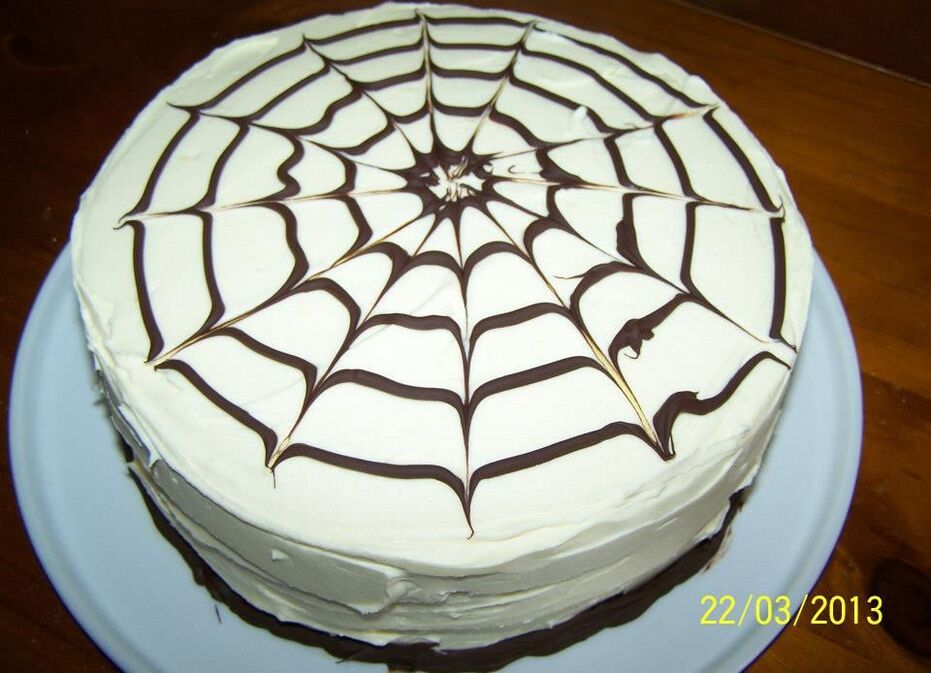