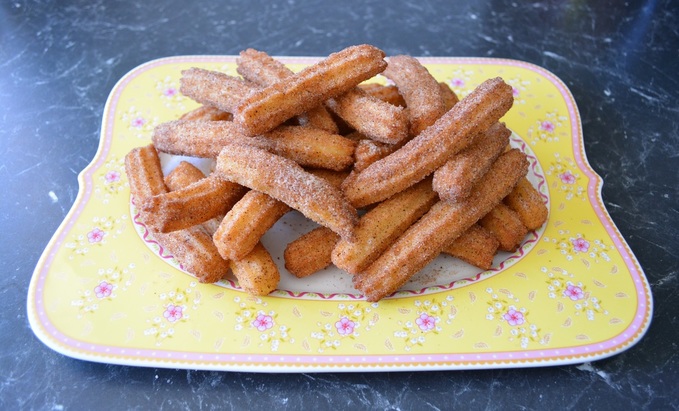 My daughter is a doughnut fanatic, she truly loves doughnuts. All doughnuts, all shapes and sizes. She has been asking for me to make churros for some time now, I keep avoiding it as I think it will be difficult. Well I was wrong, these are so easy to make, and I mean really easy, I'm talking, in 10-15 minutes you have a batter ready for frying, in 30 minutes, you are already eating churros.

When you add the eggs, start beating straight away, to ensure the eggs don't start cooking in the hot dough.

I fry about 5 or 6 churros at one time, and I never measure them, that is why I say you get between 25-35 churros.

If you don't like cinnamon, just roll in plain caster sugar or vanilla sugar. Churros is often served with a chocolate sauce, we tried that, but we prefer them plain, so I have not added any recipe for chocolate sauce.

So if you are like my daughter and you love doughnuts, give this a go, it is easy and quite fast to make, and best of all they taste great.

Place the water, sugar and butter in a medium sized saucepan. Bring to the boil.

Once boiling, add the flour, beat with a wooden spoon over a high heat until the mixture comes away from the base and side of your saucepan and forms a smooth ball. This does not take long at all. Transfer the flour mixture to a small bowl, beat in the eggs, one at a time, using an electric mixer, beat until the mixture becomes glossy.
Spoon the mixture into a piping bag fitted with  a 1cm fluted tube.
Heat oil in a large saucepan. You will need at least 5cm of oil in your saucepan. Pipe 6cm lengths of the batter into the oil (cut off lengths with a knife). Deep fry churros, in batches, for about 5-6 minutes or until lightly browned and crisp. Drain on absorbent paper.
Roll churros in cinnamon sugar. Serve warm. 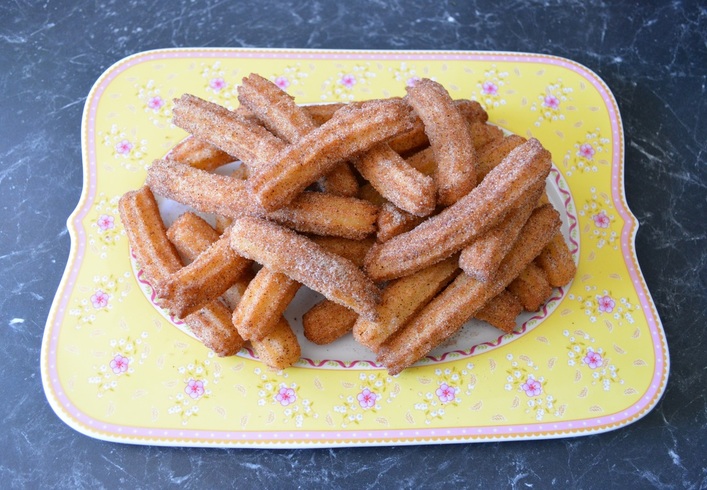