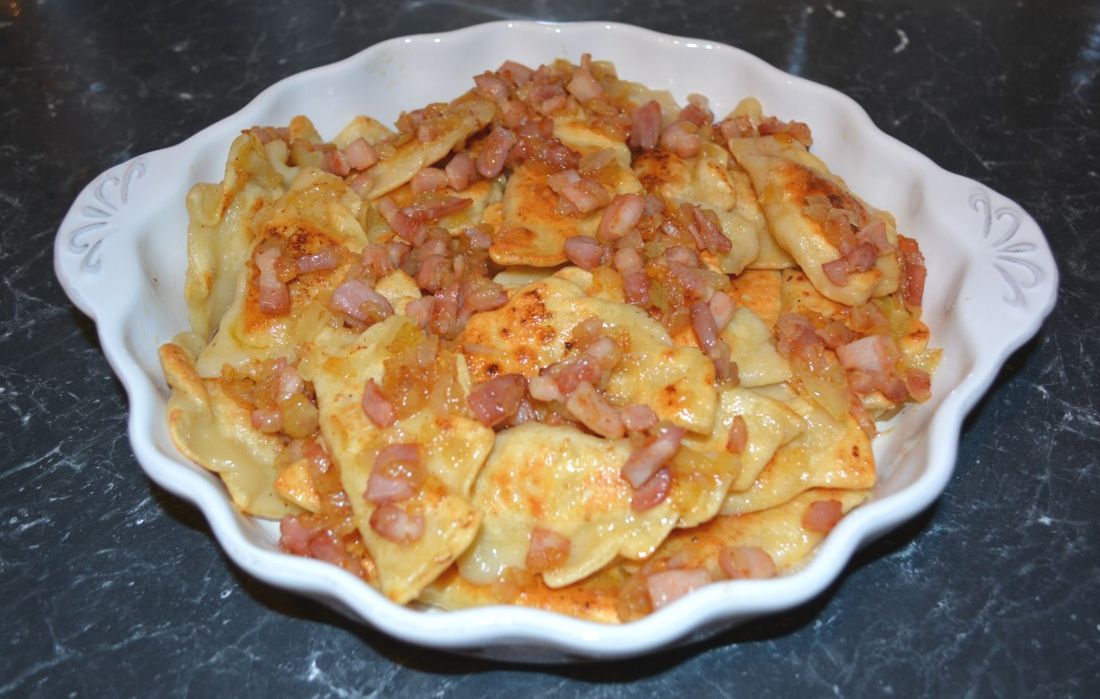 Our Eating Around the World adventure took us to the Ukraine. When looking for things to try I came across a few vareniki recipes. I liked the idea of vareniki, it looked like something we would like. I had seen a few Polish pierogi recipes that I wanted to try one day and this seemed like the Ukranian version of pierogi.

After trying these a few times, I have now combined two recipes to make my own version of vareniki.

The first time I made them I followed one recipe and although we loved the dough, it was amazing, I didn't love the filling. So the dough remained, but I played with the filling and now I'm happy with both the dough and the filling.

The dough is easy to make and work with, shaping the vareniki however, does takes a bit of practice, it does get easier and easier the more times you make them. There is a video you can watch here, I didn't follow this recipe but it does show you how to make them and give you an idea how it works. Just remember when rolling out the dough, add extra flour if it is sticky, then it is easy.

The filling needs to be like the best mashed potato you have eaten, don't skimp on the butter or the cheese or your filling will be bland. The caramelised onion is essential it makes then filling so much better.

So what I discovered if I don't want to fry the vareniki, I serve them with a sauce, like tortellini. I went with a Creamy Mushroom Sauce for a vegetarian option, not on purpose, it just happened because I love this Creamy Mushroom Sauce and I also served it with my Short Rib Ragu to see what it would be like with a meat sauce.
I invited my parents over and we had both, some of us preferred the mushroom sauce some of us preferred the meat sauce but we all agreed both were great.

Now to fry the vareniki. One of the first times I made vareniki I didn't fry them but I served them with a bacon, onion and butter 'sauce'. 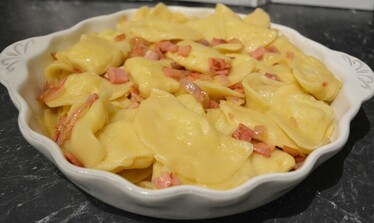 I like the butter sauce idea, but I felt it could be better. I felt the vareniki needed to be fried, I'd seen it before, but was scared to try it thinking it wouldn't work. I was wrong, they were delicious. Fried vareniki with a bacon and onion butter sauce and a dollop of sour cream and chives, pure genious. These were moorish and so tasty. Again don't skimp on the butter sauce, no it's not a light meal, but you don't have it every day so enjoy and eat it properly. I may even add mushrooms to the butter sauce next time, it would work well here.

You can add more of the topping if needed, it all depends on how much you love bacon.

Now vareniki they say can me frozen uncooked, once formed, you  just freeze them in a single layer on a baking paper lined baking sheet, cover loosely with plastic wrap, then when they are frozen transfer to snap lock bags and freeze for up to 3 months. I haven't frozen them as yet, but I will next time.

So fry them, don't fry them, serve them with a mushroom sauce or a tomato meat sauce, or with a butter sauce, all is up to your personal taste, but I loved them all.
​
So if you like dumplings, pierogi, vareniki, try these, they do take a little time, there is a bit of work involved, but my goodness they were good.

Recipe adapted from www.foodiewithfamily.com and natashaskitchen.com

For the dough: Place the egg and sour cream in a large mixing bowl, whisk together with a fork until well combined.

Cover the dough in the mixing bowl with plastic wrap and let it sit at room temperature for about 1 hour.

Now make the filling: Saute the onions slowly in the canola oil, until they have caramelised, this takes care and patience, you don't just want burnt onions, slow caramelisation is what is needed.

Place potatoes in a pot, add enough water to cover potatoes then bring to a boil over medium/high heat and continue cooking 15 minutes or until easily pierced with a fork. Drain and cool for 5 minutes.

Mash in 1/2 tsp salt, pepper to taste, 1/2 of the melted butter and the cream cheese, mash to combine. Mash in the shredded mozzarella cheese. Stir in the caramelised onions, taste, add more butter if you feel you need it. Remember this has to taste great now for great vareniki later, don't make it a wet mixture though as it will be hard to form the vareniki with a wet filling. Set aside while rolling out the dough.

Divide dough into 2 pieces. Cover the second piece with the mixing bowl and thinly roll the first piece out onto a floured surface to just under 0.3cm in thickness.

Use a 7cm diameter round cookie cutter to cut circles from the dough, keeping them as close as possible (collect scraps and place under the bowl to re-use). Add 1/2 teaspoon of potatoes over each round.
​
​​Fold the dough over the filling to form a crescent and seal the edges tightly with your fingers. Now you can pinch and twist the vareniki edge to make a nice pattern, this takes practice and gets easier and easier everytime. (If I make it with a mushroom sauce or the meat sauce I sometimes pinch the two edges together to make it look like tortellini other times I just leave it in a crescent shape).

Place the finished vareniki on a sheet of baking paper dusted with flour until ready to boil. Keep refrigerated if making them ahead of time.

If you have leftover filling, just serve it as mashed potato the following day as a side. 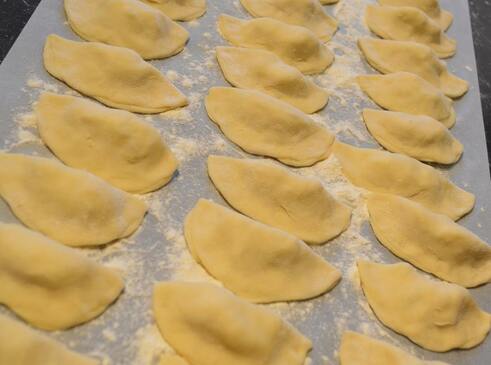 ​Make the Topping/Zazharka: Saute bacon and onion in butter, until the onion has softened and the bacon is cooked.

Bring a large pot of salted water to boil. Once boiling, place 1/2 the vareniki in boiling water. After they float to the top, cook about 2 to 3 minutes more, then remove them with a slotted spoon to a bowl. Repeat with remaining vareniki.

As soon as you add the vareniki to the water, in a large frying pan, add about 50g butter. Once the vareniki are cooked, add as many as can fit in the pan in a single layer, the ones that don't fit, I just leave unfried, as they are great like that to. Fry until lightly coloured on both sides, add to the the other cooked vareniki. Repeat with second batch of vareniki.

Drizzle the vareniki with melted butter and bacon topping. Serve with sour cream and chopped chives. 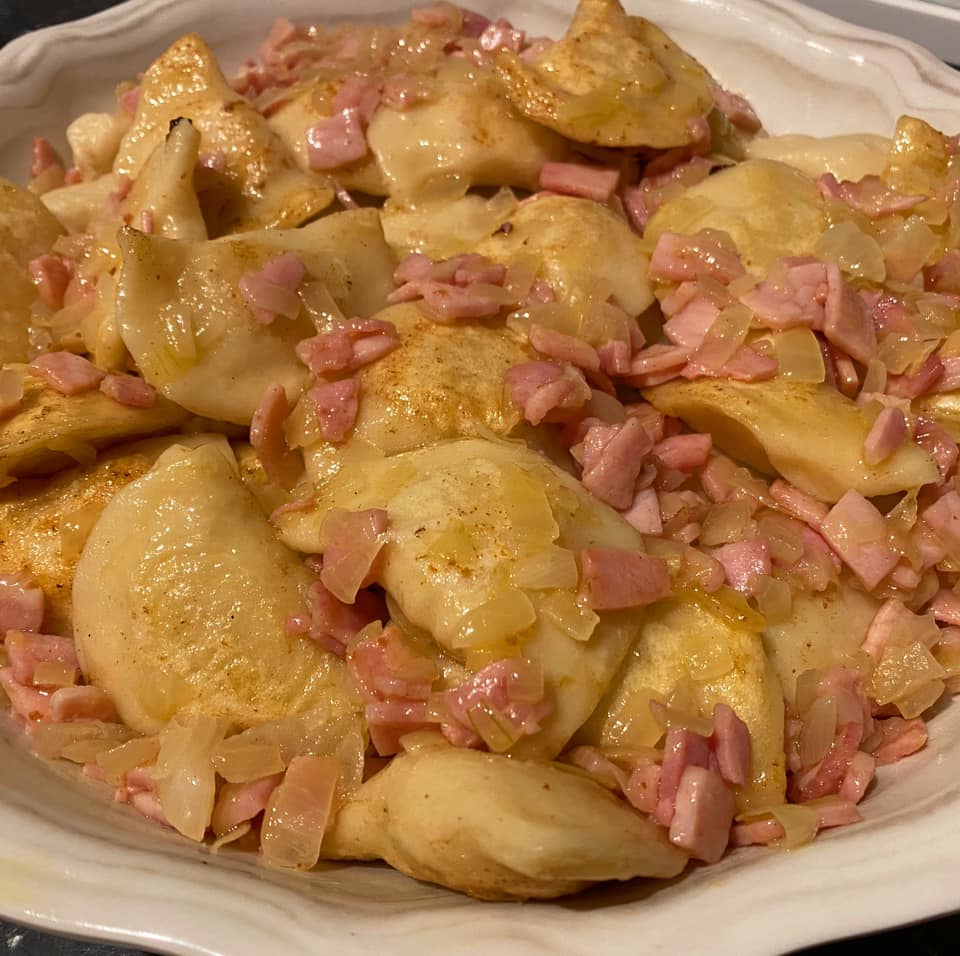