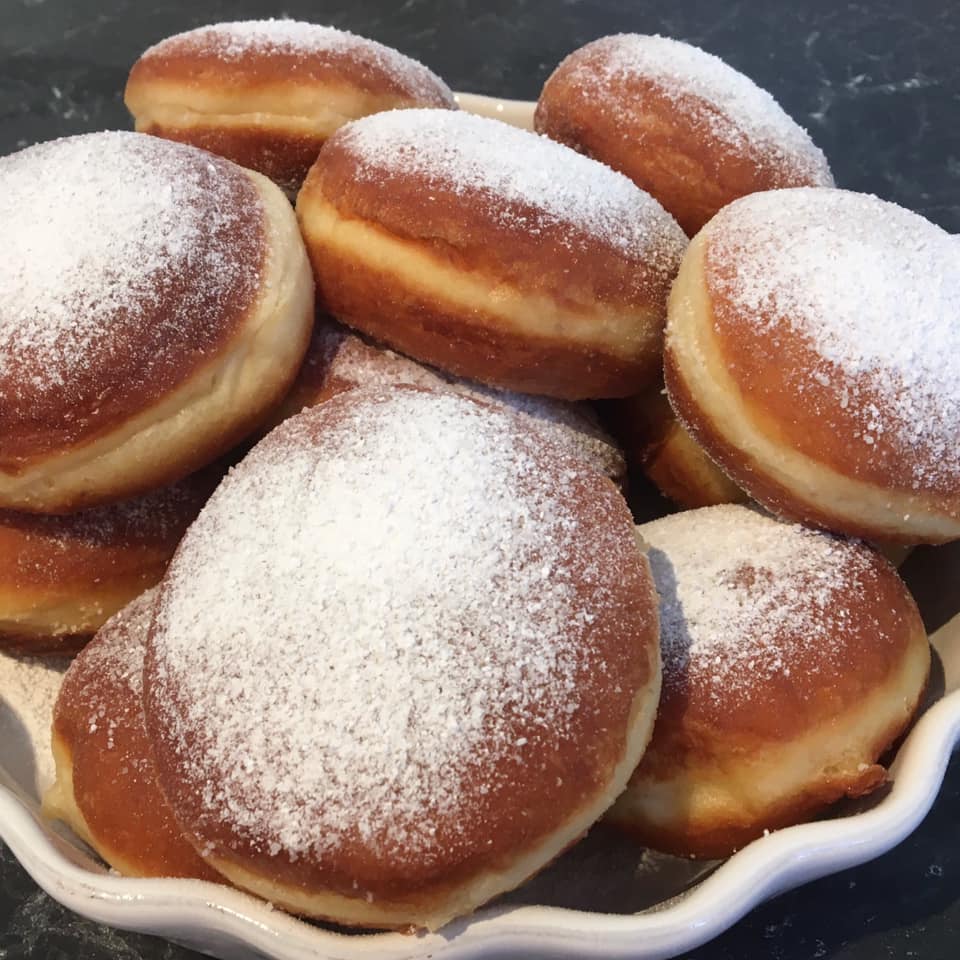 My obsession with the doughnut started in 2017, when I was on holidays in Croatia. I was in Vrsi, my mums hometown village, a village near Zadar, my favourite place on this planet. Every morning I would walk to the local convenience store in the village and buy freshly made custard or jam filled doughnuts (krafne for those in Croatia) for my family. These doughnuts are the most delicious doughnuts I have ever had, they were soft and fluffy, and delicious. 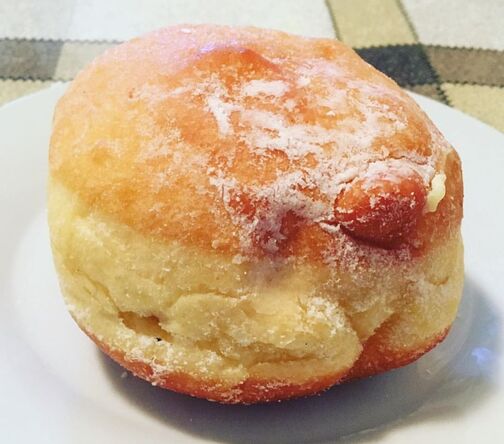 This was my facebook post while in Vrsi in 2017 "This is the reason I have to walk an hour through the selo every morning. Croatian Krafne, Vanilla, chocolate or jam filled. Addicted. Will learn to make them when I get home #vrsi #love #lovefood"
I kept my promise,  I practiced and I practiced, I'm not even sure how many recipes I have tried over the years. Some were dense, some I browned too much, some had too much of a yeasty flavour, some had too much salt, some didn't rise enough. All were good, but they just didn't taste as good as the ones from Vrsi, until now.

These doughnuts are light and fluffy, they rose beautifully. I finally got the right oil temperature, where they didn't brown too much on the outside, but cooked all the way through. They got the white line through the middle. I am happy, it really was a joyful day in my kitchen today.
​
Now if you look at the Vrsi doughnuts, they are not perfect circles, they look a little rough. Now in this original recipe, mine too would have looked like that if I followed the recipe exactly, as in the original recipe, you hand roll the doughnuts into rounds, so by hand, you never really get the perfect circle. I on the other hand chose to roll out the dough and cut the doughnuts out with a round cookie cutter, that is why mine look more perfect.​

This is a recipe for those that have strong free standing cake mixers. You need a mixer with a powerful motor to make these. You need to have a paddle attachment, now I have made it using the dough hook, and they were great to, but the paddle attachment worked best.

This is a time consuming recipe, not the actual cooking time, but the 'proving' time, however, where I refrigerate the dough for two hours, the original recipe refrigerates it overnight, so you can split this recipe into a two day process, which makes it feel like it doesn't take too long to make. If you want to do it in one day, I start it around 6:30am, so we can cook them around 4:30-5pm.

The recipe states to use 150g water, now that may seem strange, but it works out to be about 150ml of water. The reason the recipe weighs everything, rather than using cups, is because it is more accurate, I much prefer to weigh everything than use cup measures. Different countries use different cup sizes, some people will pack in ingredients into a cup, some will not. By weighing, you eliminate all variations.

Now I say to leave the cut out doughnuts to prove for 4 hours, but it can take as little as 2 to 3 hours depending on the day. They just need to be puffy and doubled in size. The puffier, the better.

With the fillings, so far I have only filled them with nutella or jam. My focus has been on get the doughnut right. Next time I make them I'll make them with custard, both vanilla and chocolate.
​
So if you to are looking to try your hand at making doughnuts, give this recipe a go, I'll walk you through it.

For this recipe you need a strong powerful freestanding cake mixer with a paddle attachment. I used my kitchenaid, and it works it.
Recipe adapted from https://www.bbcgoodfood.com/

500g strong white bread flour
60g caster sugar
15g fresh yeast, crumbled
4 eggs
zest of 1/2 lemon
1/2 teaspoon salt
125g unsalted butter, softened
about 2 litres sunflower oil, for deep frying
icing sugar or caster sugar, for dusting
​
​Put 150g water and all the dough ingredients, apart from the butter, into the bowl of a mixer with a beater paddle. Mix on a medium speed for 8 mins or until the dough starts coming away from the sides and forms a ball. Turn off the mixer and let the dough rest for 1 min.

Start the mixer up again on a medium speed and slowly add the butter to the dough – about 25g at a time. Once it is all incorporated, mix on high speed for 5 mins until the dough is glossy, smooth and very elastic when pulled.
​
Cover the bowl with plastic wrap or a clean tea towel and leave to prove until it has doubled in size, this takes about two hours.

Knock back the dough in the bowl briefly, then re-cover and put in the fridge to chill for at least 2 hours or overnight.
​
After two hours, or the next day, take the dough out of the fridge.

I'm going to give you two ways to form your doughnuts. I use the rolling pin method, but you can also use the hand rolling method. 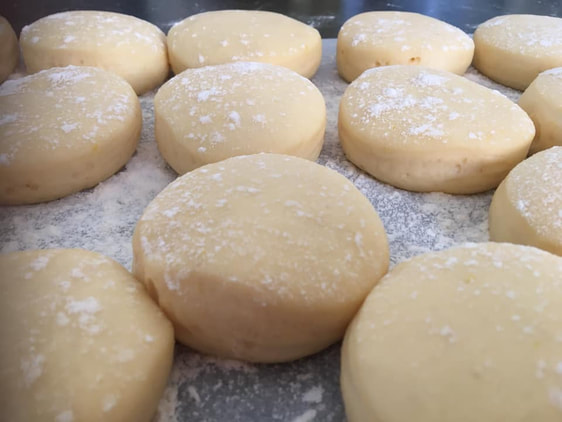 Fill your deep fryer or heavy-based saucepan, I use a deep sided frying pan, with oil, you need about 5cm oil. Heat the oil to 180C. Now it is so important at what heat you are heating up your oil. If you do it over a high heat, what I found will happen is your doughnuts will brown too fast on the outside and still be uncooked in the centre, as the oil is too hot. Too low and they won't cook fast enough. So here is what I do, I heat up the oil slowly over a medium heat. I don't use a thermometer, I just throw in a cube of bread and when it sizzles as soon as I add the bread, the oil is ready. Then the first doughnut I test the oil with is one of the ones that I made from the re-rolled dough, as they are my imperfect ones.
​
​When the oil is heated, carefully slide one doughnut from the tray using your hands or a floured pastry scraper. Taking care not to deflate it, put it into the oil. Fry for 2 minutes on each side until golden brown – they puff up and float, so you may need to gently push them down after about 1 min to help them colour evenly.

Remove the doughnut from the fryer and place it on kitchen paper. Open it up to see if it has cooked through.

Now if your oil is at the right temperature, and the doughnut is golden brown and cooked through repeat with the more doughnuts, frying 2-3 per batch, depending on the size of your fryer or pan. Repeat the steps until all the doughnuts are fried, but keep checking the oil temperature is correct – if it is too high, they will burn and be raw in the middle; if it is too low, the oil will be absorbed into the doughnuts and they will become greasy.

Remove the doughnuts from the fryer and place them on kitchen paper.

While still warm, dust the doughnuts with sifted icing sugar or toss the doughnuts in a bowl of caster sugar.
​
Set aside to cool before filling.

To fill the doughnuts, make a hole with a small knife in the crease of each one, anywhere around the white line between the fried top and bottom.

Fill a piping bag with your filling and pipe into the doughnut until nicely swollen – 20-50g is the optimum quantity, depending on the filling; cream will be less, because it is more aerated. After filling, the doughnuts are best eaten straight away, but will keep in an airtight tin.
​