Burek is usually just made with meat, let me get that out of the way before I get criticism on this issue. But when I was making this, I decided to add potato as I do it in my mince and potato pita, and as we like it there,  I thought why not add it here. We love it with potato, so the potato stays, and we are still calling it burek, as it is burek to us.

Now burek is truly one of our favourite things to eat. Normally my husband would head out to Rockdale and buys a meat burek, with either a cheese or a cheese and spinach burek also. They go so quickly. That homemade pastry with their fillings. Delicious.

But recently I ventured out to visit my parents and near to where they live is Ivan's Butcher in Chester Hill, I found homemade filo dough, so I grabbed two packets not knowing how to even make cook with them, but I knew I was going to try.

Well this worked out perfectly, the end result is just like a bought one.

Now I have combined two recipes here, my mince and potato filling I found years ago on coolinarka, but I didn't want the topping I put on my pita. Then I found the water-oil mixture idea from one of my Dobar Tek cookbooks Savijace i Gibanice od vucenog tijesta.

Now the first time I made it, I doubled the filling, as I had no idea how much I would need. It turned out more like a pie. Now my boys loved it, but I found it wasn't like burek, there was a lot of filling, but the pastry got lost. So the next time, I made it as per this recipe and it was perfect. For me although I love filling, you need to taste the pastry.

Now my daughter recently went to Croatia and learnt how to make the dough from her baka. 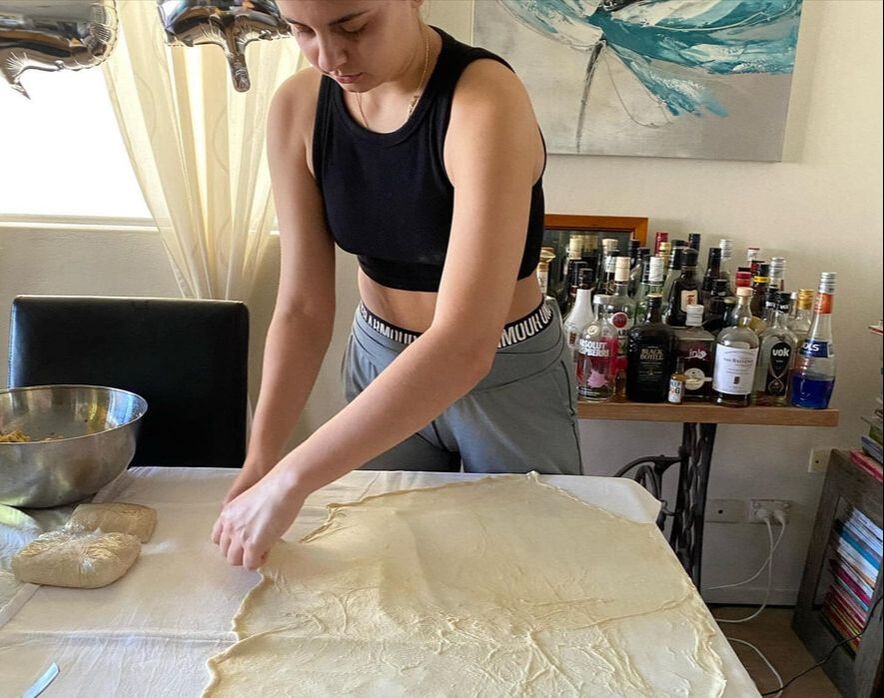 This was her first ever solo attempt at making filo dough
So one day soon I will post one with homemade dough.

The baking tray I use is the biggest one that fits in my oven, use whatever tray size you have.

In the original recipe it says to boil the water, oil and salt, then cool. Not sure why, but I don't do it. But you can if you want to.

Try as best as you can to divide the filling evenly between the layers of pastry.

Topping:
250ml water
5 tablespoons sunflower oil
2 teaspoons salt
​
​Add a tablespoon of oil into a large frying pan. Add the chopped onion and sauté over a low-medium heat for about 3-4 minutes, or until the onions have started to soften.

Add the mince, salt, pepper and vegeta. Increase the heat to medium-high, sauté, breaking up the mince as you stir, for about 4 minutes or until the mince has browned.

Add the grated potato, sauté for 2 minutes, stirring regularly. Taste for seasoning. Allow to cool for about 30 minutes.

Topping: In a bowl, combine the water, oil and salt.

Place two pastry sheets on the base of your prepared tray, make sure it overhangs over the edges a bit. My tray is large, so I cut another sheet in half and add it to so the entire base is covered with overhang also.

Lightly sprinkle the dough with the topping mixture.

Now sprinkle on some of the mince mixture. You really do just put it on sparingly, the  mince is just scattered over the filo, it does not cover the filo.

Place another single layer of the pastry, no overhang now, again I cut sheets to make up the single layer.

Lightly sprinkle the dough with the topping mixture.

Now sprinkle on some of the mince mixture. Remember sparingly.

Once the mince is used up, place the last two sheets of filo on top to finish, just like on the base. Pull over all your overhanging sides to enclose the burek.

Now generously moisten the pastry with the topping mixture, you don't want it soaking, but you want it wet.

Place in your preheated oven and bake for 30 minutes or until the pastry has browned nicely and is crisp. 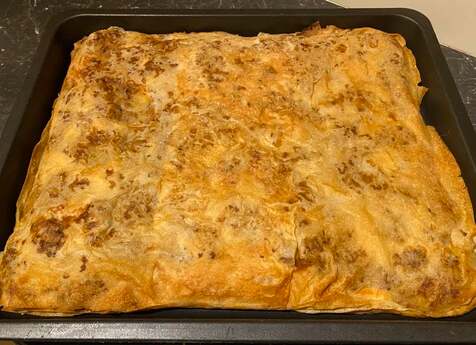 I use scissors, as I don't want to scratch my oven tray to cut them into slices. But you can easily cut it with a knife. Serve hot. 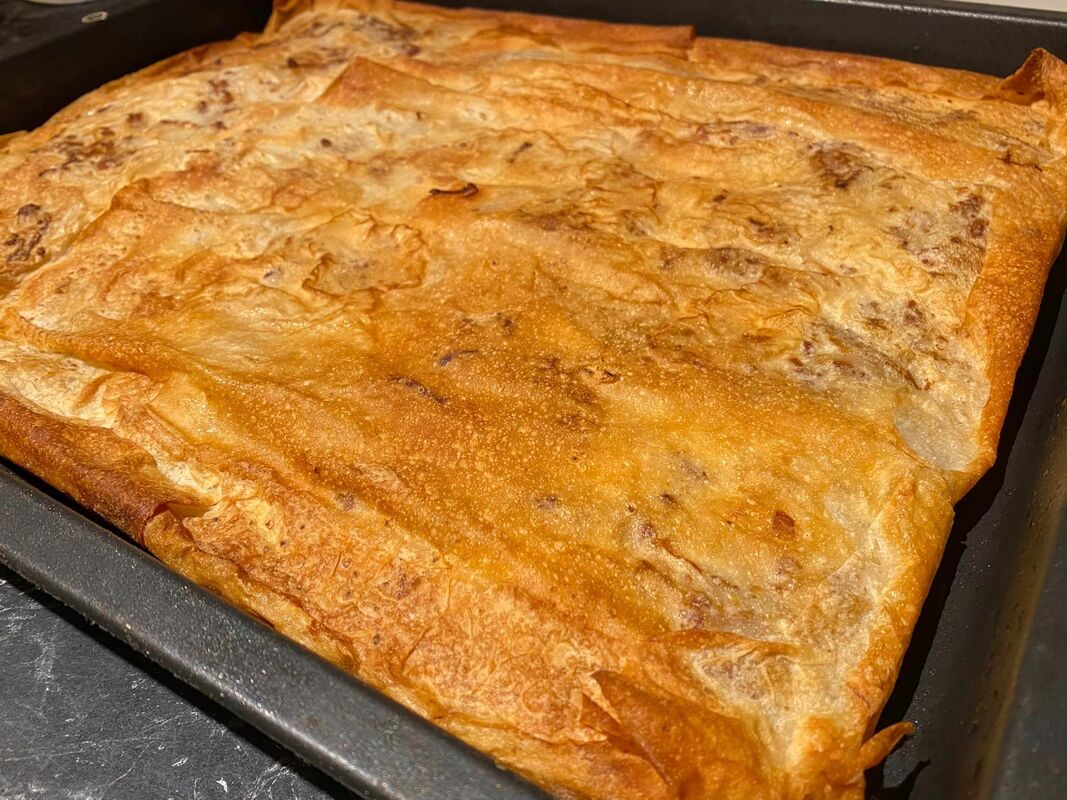