Using the words of my friend 'this is sensational'. We really loved this Cannelloni, my kids said they loved it more than lasagne.

I made this the other day and it was brilliant. I doubled the recipe as I was making it for us and for a friend. As I was driving it to her, my car smelled amazing. I delivered the meal, not really knowing if it was good or not, as I had not tried it. But that is how I cook, I try and hope for the best, family and friends are my taste testers. This was a success, this was a hit.

Once I got home, I put my own families cannelloni to bake. It really was good. The mince mixture, topped with the béchamel and the tomato sauce, so good. My kids are funny as the very edge of the cannelloni shells that don't get completely covered with the sauce are cooked, but crisp, they thought that was the best bit.

This I did in stages. I made the mince filling first, allowing it to cool before filling the cannelloni shells. Then I made the sauce, and allowed it to cool. The only thing I made close to serving was the béchamel. So I assembled completely both families cannelloni, put my friends to bake, then went and delivered it to her. When I got back home I just put mine to bake, and it worked, so you can make it earlier and just put to bake when needed, mine sat assembled for 1.5-2 hours before I baked it.

It is important to season the dish with salt and white pepper at all stages. Now you don't want to eat horribly salted food, however season the mince, season the tomato sauce and season the béchamel. Taste each step, it needs to taste nice on it's own, it really does make this dish. Start with a little seasoning, then add more if needed, I can't tell you how much is enough as it is to taste.

Notes about doubling up the recipe:

With regards to the sauce, I added an extra tin of tomatoes and used a large onion instead of a medium sized one. I also used 2 cloves of garlic instead of 1, all other ingredients I left the same.


With regards to the filling, I increased the onion from a medium one to a large one, all other ingredients were doubled.

With regards to the Béchamel sauce, except for the onion, all ingredients were doubled. I felt one onion was enough to flavour the sauce.

Finally with the cheese you sprinkle on top, I did not measure it when I doubled the recipe, I just sprinkled as much of it as I liked on top, roughly keeping to the recipe.

You could exchange the dried cannelloni shells for fresh pasta, fill and roll it up yourself, you could even use crepes instead.

To make the tomato sauce: Heat oil in a small saucepan, add onion and garlic, cook stirring, until onion has softened. Add tomato paste, stir for 20 seconds. Add the tinned tomatoes, sugar, salt and pepper. Bring to the boil, reduce the heat and simmer, covered for 10 minutes.

Using a stick blender, blitz the tomato sauce until quite smooth, does not need to be perfectly smooth.

To make the filling: Heat oil in a large pan, add onion and garlic, cook until the onion has softened. Add the mince, cook, stirring, breaking up mince as you go, until brown. Add oregano, basil, vegeta and tomato paste, cook, uncovered, stirring occasionally for 15 minutes.

Put the spinach in a bowl, pour boiling water from a kettle over the spinach to cover completely, leave for 1 minute, then drain. Roughly chop up spinach.

Add the spinach to the mince mixture; mix it in well.

Combine the egg and the cream, pour it into the meat mixture, stir through, season with salt and pepper. Allow to cool so you can fill the shells.

To make the Bechamel: Place onion, peppercorns and milk in a small saucepan. Bring slowly to the boil, remove from heat, stand 5 minutes. Strain the milk mixture into a pouring jug, discard the onion and peppercorns.

Melt the butter in a medium saucepan, once melted add the flour and whisk over medium heat for 1 minute. Add the strained milk, whisk, continuously, until the sauce boils and thickens. Add the cream, season with salt and pepper, whisk until combined.

Place some of the tomato Sauce in the base of your shallow ovenproof dish. You just need to cover the base thinly. 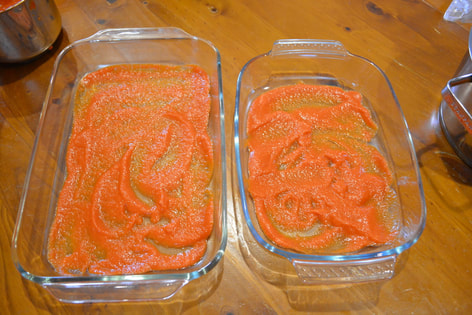 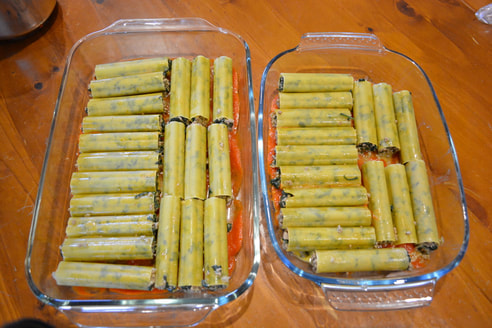 Spoon the béchamel sauce over the cannelloni, spread out evenly. Then pour over the remaining tomato sauce.

Sprinkle mozzarella and parmesan over the top. 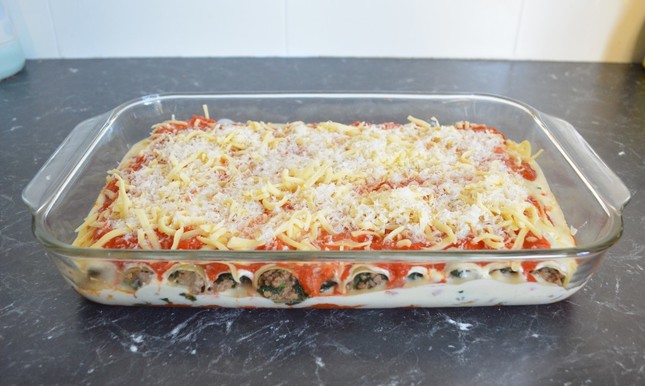 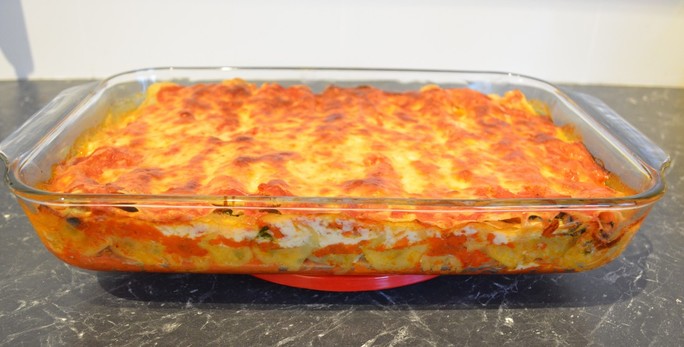 Serve with a green salad. 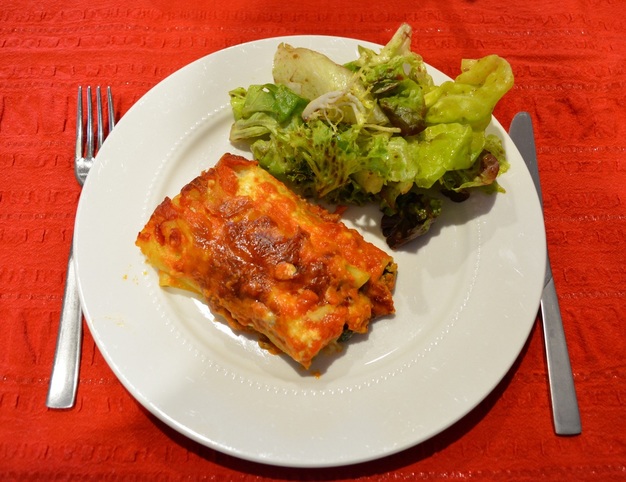