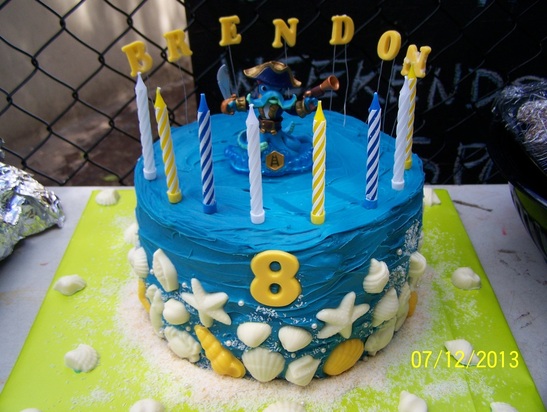 This cake was made for a gorgeous boy that loves Skylanders.

The brief was a chocolate cake with blue icing, similar to the Sea Shell Cake I had made before. I thought that was great as this cake is quite simple to make.

So the chocolates shells, names and numbers you can make up to a week in advance. In the recipe I have tinted the white chocolate yellow, this works fine, however if you add too much colour the chocolate can seize. If you can find yellow coloured chocolate buds they work perfectly every time, however can be quite expensive.

The cake can be baked up to a week in advance.

The icing and assembly the day before or on the day if you have the time. Simple.

With the Ganache, I like to make more than is needed, as there is nothing worse than not having enough, as matching the colour is so hard. Leftover ganache can keep for up to a week in the refrigerator and used for cupcakes another day.

Decorations:
375g white chocolate melts
Yellow food colouring
1/2 cup desiccated coconut, toasted
45 pearl balls
Candles
Skylanders figurine
First I make the white chocolate shells, as this can be done up to a week before they are needed.

Place the white chocolate in a heatproof bowl over a pan of simmering water. Don't let the water
touch the bowl. Stir until melted.

Pour half of the chocolate into a piping bag, and pipe it into the shell moulds. you can use a teaspoon to do this, but it was easier to use a piping bag. Refrigerate until set.

For the numbers and letters use some of the tinted yellow chocolate, pipe into the letters and numbers you need. Refrigerate until set. Use a little extra melted chocolate to secure the wire to the numbers and letters. Refrigerate until set.
Make the chocolate mud cake recipe twice (up to the step where it is baked and cooling). I made one, 4 days before, and the other 3 days before
Toast the coconut, I did it in a frying pan over medium heat, moving it around until it is lightly browned all over, place in a bowl to cool.

Make the white chocolate ganache, as per recipe, adding the blue food colouring, a little at a time, until you have reached the colour you like. I make 2 times the recipe to ensure I have enough, leftover ganache can be refrigerated and used again later in the week.

The ganache needs to be refrigerated until it is of a spreadable consistency, stir it every 10 to 15 minutes, this takes around an hour.

Place one cake on a round plate, spread 1/2-1cm of the ganache. Top with the other cake.

Spread a thin layer of the ganache all over the cake and refrigerate for 15 minutes. This ensures all the cake crumbs stick to this layer of ganache and don't ruin your final layer.

Place your cake on your cake board. Spread a thickish layer of ganache all over the top and sides of the cake, spread out into a smooth yet swirl effect (like water) make sure you cannot see the cake underneath.

Using the picture below as a guide, position the chocolate shells around your cake. Sprinkle with the toasted coconut and decorate the cake with the pearl balls. 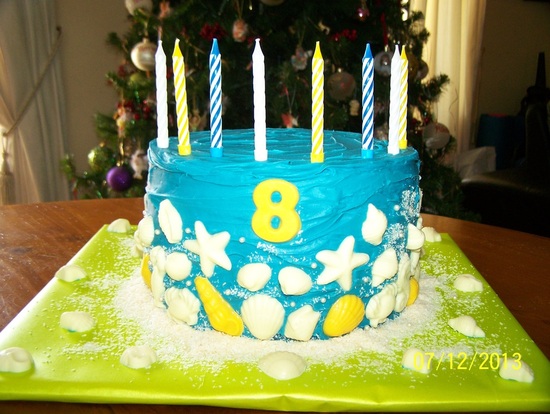