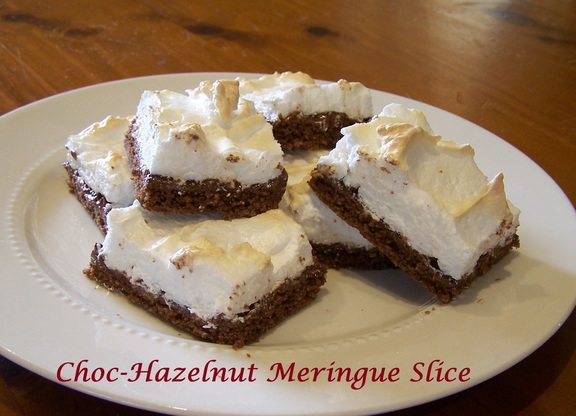 I was going to my mothers and she asked me to bring a gluten free dessert as some of my cousins are 'special' (just kidding Mile she did not say that). I do actually take this seriously, so please no one get upset, that remark was a joke to my cousin, who is an adult, and I can joke with him freely.

So after being teased by my cousin to come up with a great dessert (he follows what's cooking ella on facebook, so knows what I cook) I went about trying to find something that would be nice.

Well the first time I made this, I liked it, however it was far sweeter than I like my desserts. So after tweaking it a bit, I think I have come up with a dessert that suits everyone, not just coeliacs.

I have adjusted the amount of sugar that goes into the base and the meringue, so they are no longer sweet. I find if you add the 3/4 cup Nutella, this dessert is still sweet for me, so for my own personal taste I would put less, but if you are a true Nutella fan, you probably won't mind it.

Anyway I think this dessert looks great, the dark base and filling with the white meringue, looks amazing.

The base is slightly chewy, when you put it to bake, you would never guess it will set, but it does, perfectly. You really should like hazelnuts though, as the base does have a hazelnut flavour.

The meringue is light and fluffy, I really love meringue.

I have also made this in a slightly smaller slice pan, it worked just fine, the base was slightly thicker. Because it was thicker I baked it for 25 minutes.

This keeps well in the refrigerator, so can be made in advance.

Preheat oven to 180C/160C fan forced. Grease and line with baking paper a 23cm x 32cm baking dish. Allow a 3cm overhang on all sides, so you can easily remove the slice from the pan.
In a large bowl add the sugar, egg, vanilla, flour, hazelnut meal and cocoa. Pour over the melted butter and mix to combine. Spread over the base of your prepared pan (I find using my hands works best, as the mixture is quite sticky). Bake for 20 minutes or until top is just firm to the touch.

Allow to cool for 5 minutes. Spread with Nutella. Set aside to cool (I like to put it in the refrigerator while making the meringue)
Increase oven to 220C/200C fan forced. Using an electric mixer, beat egg whites until soft peaks form. Gradually add sugar, 1 tablespoon at a time, beating well after each addition. Spoon the meringue onto the nutella, spread out, and make small peaks with a spoon or spatula. Bake for 5 minutes or until golden. Cut into squares. Serve. 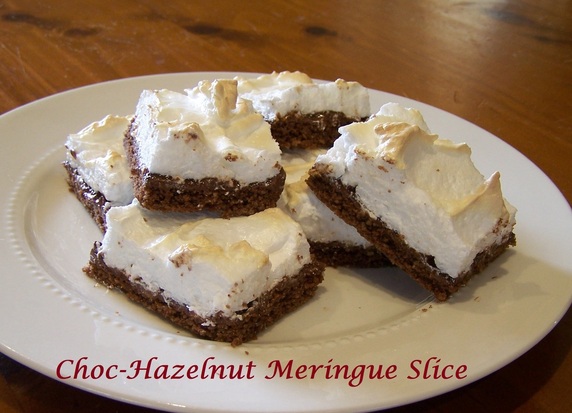