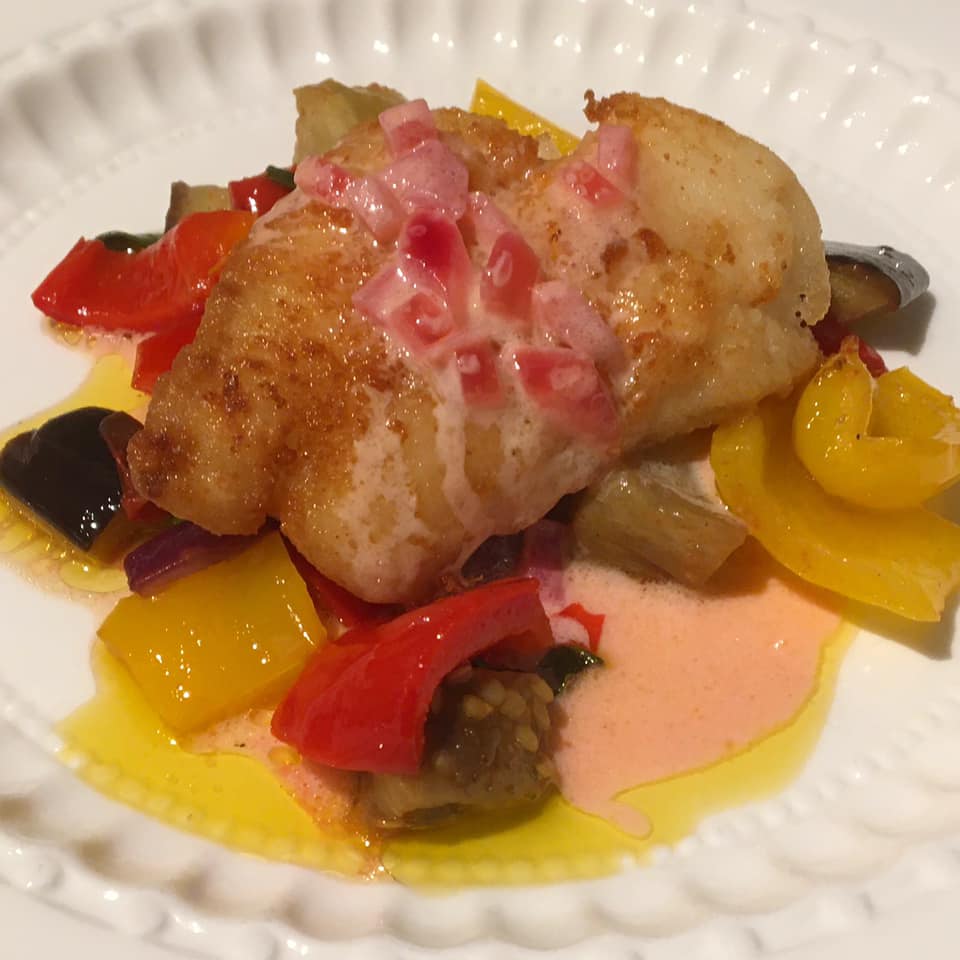 Our Eating Around the World Adventure has taken us to Greenland. Now I know very little about food from Greenland, I have done some research, though finding recipes can be challenging, but I have found a few traditional recipes that I want to try, and this is one of them.

This is a recipe where at first I wasn't sure it was from Greenland, it had more of a French vibe for me with the roasted vegetables and pan fried fish with a butter sauce.  The original author states it came from the official tourism site of Greenland (I could not find it there), but I trust it is from Greenland, why would they say it was, if it wasn't, and either way the flavour combination was something I wanted to try.

The fish was perfectly cooked, now in Greenland they would use halibut, but as I could not find that, I went with ling fillets. Ling fillets are very forgiving in that you can rarely overcook them, they don't go dry like other fish. They are mild in flavour so perfect for people that don't want fish to taste too fishy. By adding flour, which wasn't in the original recipe, you get a crisp coating to the fish when fried. It is hard to tell you how long to fry it for, as it depends on the thickness of the fillet, but with ling I use the fork test, get two forks, try and seperate the thickest part of the fish, it should give way or flake easily, if it is holding on for dear life and won't flake, keep cooking it.

The vegetables are amazing, just make sure you cook them through, tough eggplant is unpleasant, it needs to be soft. Now seasoning is the most important thing here, season a little before baking, them taste before serving and season again, if needed. Once it came out of the oven I added extra virgin olive oil, to taste, I thought it needed it.

And the sauce, on it's own, although tasty, it is a little acidic from the lemon and wine, I did add a pinch of sugar, not to make a sweet sauce, but to balance it out a little. Once you add the sauce on the fish and it drizzles onto the vegetables, it all balances out and it is delicious. With my family, I suggested to try a little sauce, just in case they didn't like it, but after one bite, they all went back and added more.

So to recap, the changes I made to the original recipe: I added extra virgin olive oil to the vegetables, the Croatian in me needed to add it, it made it taste better. I also dusted the fish with flour before frying, as it gives the fish a lovely coating. I did not add the salami to the vegetables, I didn't think it needed it, but I did add some red onion, and I substituted silverbeet instead of spinach. I doubled the sauce recipe, which was a good idea as I cooked more fish than stated, as there is more than 4 people I need to feed. The vegetables feed around 6 people, there was plenty to go with the extra fish. And I also added the tomatoes to the vegetables in the oven for 5 minutes to heat up, rather then just add them in cold. So with my changes it may not be purely Greenlandic, but the changes are minor and the outcome was a delicious dinner.

So after I made this my family said they would love this to be cooked at least once a month, now that won't happen as I keep trying new things, but it will definitely be something I will be cooking for years to come.

Place the zucchini, red and yellow capsicum, eggplant and silverbeet or spinach in a large bowl, season with salt and pepper and drizzle with the olive oil. Toss to give it a good mix.

Line a large baking tray with baking paper, and place the vegetables in one layer on the tray.

Meanwhile, prepare the sauce by adding the butter to a heated frying pan. Next toss in the shallot, seasoning with salt, and cook over medium heat until translucent, about 3 to 5 minutes. Next add the juice from 1/2 a lemon and the white wine. Simmer for five minutes. Finally, toss in the cream and heat for a final few minutes before seasoning with salt and pepper.

Add the tomatoes to the roasted vegetables, 5 minutes before they are done cooking, just to heat up. After the vegetables have roasted, add the salami, if using, drizzle on extra virgin olive oil, to taste, and set aside, keeping warm.

Finally, season the fish with salt and pepper, dust with the flour, just to coat. Next heat a frying pan over high heat, melt enough butter and oil to lightly coat the frying pan, and add the fish presentation side down, cooking for about one to two minutes, depends on the thickness of your fillet, or until golden brown. Flip the fish and cook on the other side for another one to two minutes. Cook until the fish flakes easily and both sides the flour browns nicely and becomes crisp on the edges.

To serve spoon out roasted vegetables onto your plate, top with the fish then drizzle the sauce over the top. I also served a green salad on the side.